Wine Rival is thrilled to announce the addition of André Mack as the featured Sommelier for the 2021 event. André‘s resume is a mile long as he comes from renowned restaurants like Per Se in NYC, has been featured in multiple TV shows, and is the proprietor of Maison Noir Wines out of Oregon! On top of all that he’s running his own hospitality group in Brooklyn, NY.

Iconoclastic sommelier André Hueston Mack was the first African-American to be named Best Young Sommelier in America by Chaine des Rotisseurs. He was a sommelier at Thomas Keller’s renowned French Laundry before opening Chef Keller’s three Michelin-starred Per Se. As one of the top professionals in the wine industry he has worked with the likes of Amazon, Cadillac, eBay, National Rental Car, Microsoft and has appeared on Anthony Bourdain’s “The Taste” and NBC’s “Uncorked”. Recently, Mack has recently been featured in videos with Bon Appétit.

In 2007, he founded Maison Noir Wines which incorporated his trademark attitude and personal perspective on wine subculture. The wines are unique and distinctive garage wines (micro-négociant) that source the best fruit possible in the Willamette Valley region of Oregon to produce wines showing the individuality of their respective sites and terroirs. Mack produces 40,000 cases annually which can be found in the best restaurants and retail stores in 45 states and 11 countries.

A self-taught graphic designer, Mack designs all of his labels as well as a t-shirt line for Maison Noir Wines. He has also authored Small Thyme Cooks, the world’s first culinary coloring and activity book which he also illustrated, and 99 Bottles: A Black Sheep’s Guide to Life-Changing Wines, his part memoir and part wine guide. With his wife Phoebe Damrosch, Mack founded and runs & Sons Hospitality Group in the Prospect Lefferts Garden neighborhood of Brooklyn, which includes their wine shop, ham bar, and provisions shop with more to come. 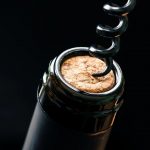